The first effects of the severe drought in Campo de Gibraltar are beginning to be visible in the houses. The supply of drinking water in various parts of the region has begun to suffer from coloration and turbidity in recent weeks.

Arcgisa, the company responsible for the water supplies mainly from the reservoirs of the region, has attributed the colour of the water to the low level of the reservoirs and to a natural phenomenon which is not dangerous to health.

The region will have water restrictions this autumn due to the most severe drought in the last 25 years;
“Although the content of these compounds is not harmful to health, the appearance of the water is not appropriate,” admits Arcgisa. 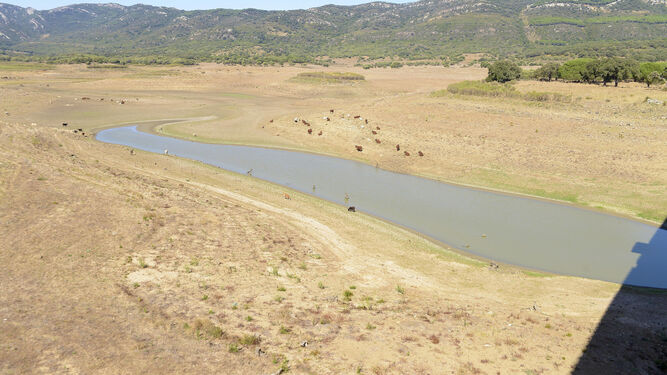 Due to the composition of the soils, iron and manganese are naturally present in the water of the reservoirs in high concentrations. “In a situation like the current one, with intense and severe drought, these concentrations become even higher, making it difficult to make the water drinkable”, the company continues.

To solve the problem, the water is made drinkable using a special procedure. “However, sometimes if there is a rapid increase in the concentration of these compounds in the water supplied to the treatment plants, some of the iron and manganese pass into the supply network causing the water to become coloured”, explains Arcgisa in the video.

Water turbidity in the region has also increased over the past week as a result of a breakdown in the reservoir water pumping system that occurred last Wednesday 18th. This breakdown affected practically all the municipalities in the region.

Once the water supply was re-established, the flow dragged mud and other impurities from the walls of the pipes, which have added to the natural oxides in the water. The same thing happened in other parts of Campo de Gibraltar.

“Since Friday, the colouring of the water in the tanks in Algeciras is getting better. Quality analyses, chlorination and other parameters have been carried out at all times. If there is some coloration left in some areas it is because the tank that supplies it has a greater capacity and takes longer to renew completely”, explained the company.

The LafargeHolcim silo, located in the port of Endesa on the Palmones Industrial Estate, will be subject to a technical blasting next Thursday at...
Read more
News from Sotogrande

The snow has arrived in the mountains above Sotogrande

This morning, a rare phenomenon for Sotogrande could be observed. The surrounding peaks were covered in snow. After Filomena caused chaotic conditions in large...
Read more
News from Sotogrande

The Official Gazette of the Andalusian Regional Government (BOJA) published an extraordinary edition in the early hours of this Saturday morning, with the new...
Read more

The Committee of Experts will meet this Friday afternoon and will consider a tightening of mobility restrictions, although for the moment there will not...
Read more

The LafargeHolcim silo, located in the port of Endesa on the Palmones Industrial Estate, will be subject to a technical blasting next Thursday at...
Read more

Spanish thermometers have reached the coldest temperatures in recent decades during the early hours of this Tuesday morning. This is so much so that...
Read more

The ‘double key’ that will rule the agreement on Gibraltar

The planned agreement on Gibraltar is already well advanced and could be concluded shortly. This was stated by the newspaper El País, which had...
Read more

Sotogrande.News is the No. 1 Website for News, Events and Information from Sotogrande and Campo de Gibraltar in English. Every month thousands of residents and...
Read more